Skip to the content
It is now February which also means it is Black History month. This a great time to honor the heroes in black history who greatly impacted America’s history. For the next month, readers can find stories about influential blacks and African Americans who make Black History Month essential. Today Evelyn Ashford is the subject.

Evelyn Ashford was the eldest of five children born in Shreveport, Louisiana. Pat Connelly discovered Evelyn Ashford when she was teenager; the two of them went on to become very successful. The US Olympic team gave Ashford a spot on their team when Ashford was 19. In her first meet in Montreal, Ashford ran well, but not well enough as she only placed fifth. Although that was not necessarily the result that she wanted, three years later, she was the first female American to sprint below 11 seconds for the 100; Ashford also ran an unprecedented 22 seconds on her 200 meter. 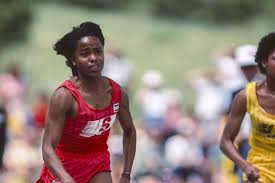 According to Olympic.org, “On 3 July 1983 in Colorado Springs (USA), Ashford set her first world record, winning in 10.79 seconds, a marginal improvement on Göhr’s time of 10.81. The following year, at the 1984 Olympic Games in Los Angeles, the diminutive American won two gold medals, clocking up a 10.97 in the individual 100m and running the anchor leg in the 4x100m relay to steer her colleagues to glory ahead of Canada and Great Britain in 41.65.

Later in her life, Ashford married pro basketball player Ray Washington; later, she gave birth to her first daughter Raina. In 1985, Ashford was ready to return to sprinting. Three years later, Ashford found herself in Seoul running the 4x100m relay. Ashford was the deciding factor in her team’s relay win; the US women ended up with a time of 41.98. At the age of 35, Ashford participated in her final Olympic games, which were being held in Barcelona, and got her three-peat in the 4x100m relay, becoming the only woman to ever have done it; her record still stands.

Ashford not only broke records for women, but she also brought attention to woman and all of their accomplishments. Ashford advanced the idea that women are incredible in their own right; in society, there is an idea that women should grow up and aspire to marriage and take care of the house and kids. While marriage can be wonderful, and children can be blessings, Ashford made is clear that women can chase their dreams and be successful, push society forward, and take care of a child and a husband all at the same time.