It is now February which also means it is Black History month. This a great time to honor the heroes in black history who greatly impacted America’s history. For the next month, readers can find stories about influential blacks and African Americans who make Black History Month essential. Today, Shirley Chisholm.

Not a lot of people know about Shirley Chisholm or her impact on America. Where to get started, to begin, before Barack Obama became the first black President, and way before Hillary Clinton campaigned to be the first woman President, Shirley Ch 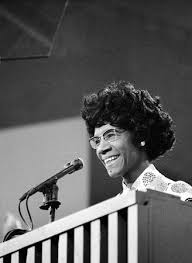 Chisholm ran to be both.

Shirley Chisholm was born in 1924, Brooklyn, New York. Chisholm qualified as a teacher, and began to work in childcare where she picked up a liking for politics. At first she worked in the New York assembly, but in 1968, Chisholm made history for being the first African-American woman elected into the U.S Congress.

However, just because she made history, does not mean that people respected her. Especially some of the men in Congress. Chisholm fought for the right of the underprivileged, and Chisholm was also a people’s champion saying,”My God, what do we want? What does any human being want? Take away an accident of pigmentation of a thin layer of our outer skin and there is no difference between me and anyone else.” “In the end, anti black, anti female, and all forms of discrimination are equivalent to the same thing – antihumanism.”‘

According to BBC.com Shirley put together “a bill to ensure domestic workers received benefits, was an advocate for improved access to education and fought for the rights of immigrants. She sponsored a bill to expand childcare for women, supported the national school lunch bill and helped establish the national commission on consumer protection and product safety.”

As well as this,”Shirley Chisholm also worked tirelessly to expand the government-funded food stamps program so it was available in every state, and was instrumental in setting up an additional scheme, The Special Supplemental Nutrition Program for Women, Infants and Children (WIC), which provided support for pregnant women.”

Although Chisholm was African-American, the hardest thing for her to face in politics was her gender.”I met more discrimination as a woman than for being black. Men are men,” she once said.

Shirley Chisholm wish to defy borders, and bring progress rights for all was what led her to “run for president in 1972, seeking the Democratic nomination a mere three years after she became a congresswoman.

“I ran because most people thought the country was not ready for a black candidate, not ready for a woman candidate. Someday, it was time, in 1972 to make that someday come,” she told an interviewer at the time.”

Chisolm is a pioneer and a woman, although she does not get a lot of attention, Chisholm still means a lot to the history of women, African-Americans, and America. She died in 2005, and became a huge motivation for people like Barack Obama, and Hillary Clinton.