It is now February which also means it is Black History month. This a great time to honor the heroes in black history who greatly impacted America’s history. For the next month, readers can find stories about influential blacks and African Americans who make Black History Month essential. Today, Rosa Parks is the subject.

Rosa As A Young Woman

Segregation plagued Parks, and her husband Raymond everywhere they went. Jim crow laws made it so blacks could not get a lot of good jobs, and therefore, make good money. In other words, it kept the white rich, and the black poor.

In December 1943, years before the Montgomery boycott, Rosa Parks became the secretary of the NAACP. As secretary, Rosa worked very closely with Edgar Daniel Nixon, who was a railroad porter, who acted as a voice for black people who desired the right to sign up to vote. 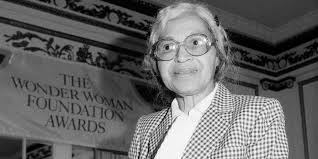 Start of the Montgomery Boycott

Now 42, Rosa was catching a ride home after a long day of work. The rules for buses at the time were that blacks had to sit in the back, and whites in the front. The bus was unusually busy, and as a result of this, there were so white people who had to stand. The bus driver ordered four blacks to give up their seats, all but one of them refused: Rosa Parks.

When Black seamstress Rosa Parks refused to give up her seat to a white man, on the Mongomery, Alabama, city bus, she was not thinking that her action would start a movement. In fact, Rosa herself said,“People always say that I didn’t give up my seat because I was tired,” wrote Parks in her autobiography, “but that isn’t true. I was not tired physically… No, the only tired I was, was tired of giving in.”

The actual start of the bus boycott happened when E.D Nixon came over to Rosa’s house that night. According to History.com,”An idea arose as well: The blacks of Montgomery would boycott the buses on the day of Parks’ trial, Monday, December 5.”

The Montgomery boycott would probably not have happened if the courts had ruled Parks innocent. However, the courts did rule Parks, had to pay 14 dollars in charges.

Impact of the Montgomery Boycott

On the first day so many people boycotted which according to History.com led,”Nixon and some ministers decided to take advantage of the momentum, forming the Montgomery Improvement Association (MIA) to manage the boycott, and they elected Reverend Dr. Martin Luther King Jr.–new to Montgomery and just 26 years old—as the MIA’s president.”

Also according to History.com,”As appeals and related lawsuits wended their way through the courts, all the way up to the U.S. Supreme Court, the boycott engendered anger in much of Montgomery’s white population as well as some violence, and Nixon’s and Dr. King’s homes were bombed.”

“On November 13, 1956, the Supreme Court ruled that bus segregation was unconstitutional; the boycott ended December 20, a day after the Court’s written order arrived in Montgomery. Parks—who had lost her job and experienced harassment all year—became known as “the mother of the civil rights movement.”

Eventually living in Montgomery became dangerous for Rosa and her family, so she, her husband, and mother moved to Detroit.. However, once in Detroit, Rosa didn’t hide away, she became even more active.  History.com states,”Parks became an administrative aide in the Detroit office of Congressman John Conyers Jr. in 1965, a post she held until her 1988 retirement.”

Rosa’s husband, mother, and brother “all died of cancer between 1977 and 1979. Filled with grief at all of her losses, Rosa still did not stop advocating for equality. History.com states,”In the years following her retirement, she traveled to lend her support to civil-rights events and causes and wrote an autobiography, “Rosa Parks: My Story.” In 1999, the United States awarded Parks with the Congressional Gold Medal. The CGM is the highest honor the U.S can give a citizen.”

Parks died at the age of 92, due to dementia complications, and old age. Parks was the first woman to “lie in state at the U.S Capitol.”