It is now February which also means it is Black History month. This a great time to honor the heroes in black history who greatly impacted America’s history. For the next month, readers can find stories about influential blacks and African Americans who make Black History Month essential. Today, Muhammad Ali is the subject.

On June 3rd, 2016, the world lost “The Greatest” Muhammad Ali. A respiratory illness that stemmed from Ali’s Parkinson’s killed Ali in the end. Doctor’s diagnose Ali with Parkinson’s early in the 1980’s.

Nevertheless, Ali put a positive spin on Parkinson’s saying,”Maybe my Parkinson’s is God’s way of reminding me what is important. It slowed me down and caused me to listen rather than talk. Actually, people pay more attention to me now because I don’t talk as much.” I always liked to chase the girls. Parkinson’s stops all that. Now I might have a chance to go to heaven.”

After boxing Ali went on to greatly impact the world. Ali dedicated his life to humanitarian activities all around the world. The website Biography.com says,”It is estimated that he has helped to provide more than 22 million meals to feed the hungry. Ali traveled, on average, more than 200 days per year.” 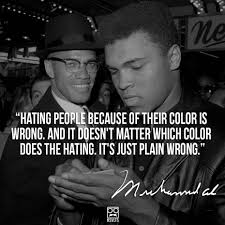 In 1964, Ali signed up to join the Armed Forces, but he failed the qualifying test because he wasn’t very good at writing and spelling. At the same time, Ali converted to Sunni Islam and shed the name Cassius to become Muhammad Ali in 1975. Ali claimed,“Cassius Clay is a slave name. I didn’t choose it and I don’t want it. I am Muhammad Ali, a free name – it means beloved of God – and I insist people use it when people speak to me and of me.

However, as Biography.com states,”By refusing to respond to this name, Ali’s personal life was filled with controversy. Ali was essentially banned from fighting in the United States and forced to accept bouts abroad for most of 1966.”

A few years later in 1966, the military reviewed Ali’s qualification papers, and Ali received a 1A classification, but Ali wanted no part of war saying,“War is against the teachings of the Holy Koran. I’m not trying to dodge the draft. We are not supposed to take part in no wars unless declared by Allah or The Messenger. We don’t take part in Christian wars or wars of any unbelievers.”

Ali also said,“Why should they ask me to put on a uniform and go 10,000 miles from home and drop bombs and bullets on brown people while so-called Negro people in Louisville are treated like dogs? “

Ali appeared at rallies with the current leader Elijah Muhammad declaring his allegiance even though many people received him with great wariness, and hostility.

Ali always had a boxing style that made him different from other fighters. Ali tended to avoid hits rather than look to hit others.

On October 29, 1960, Ali won his very first professional fight. It took six rounds but he finally was victorious over Tunney Hunsaker, who was chief police in Fayetteville West Virginia.

November 1966, the United States let Ali back in the country as a fighter. Ali fought Cleveland “Big Cat” Williams, Ali and “Big Cat” fought in the Houston Astrodome.

The fight was never that fair considering that “Big Cat” had suffered a bullet wound that left him with a missing kidney, only 10 feet of his small intestine and a severely shriveled and nerve damaged left leg. It only took Ali three rounds to beat him.

“On February 6, 1967, Ali returned to Houston boxing ring to fight Terrell in what became one of the uglier fights in boxing. Terrell had angered Ali by calling him Clay, and the champion vowed to punish him for this insult.”

Terrell lost in 15 rounds of savage torture. Terrell only one two of those rounds, but Ali chose to refrain from knocking him out. Experts say that Ali might have purposefully made the fight long in retribution for Terrell’s insult.
Ali “The Greatest”

Ali got a lot of fame for fighting Doug Jones. The fight became the “Fight of the Year in 1963.” Ali and Jones fought for 10 hard rounds, and Ali won.

Ali ultimately lost the “The Fight of the Century” versus Joe Frazier, this was a 15 round fight that Frazier just barely won. Although Ali lost that fight, it almost added to the fact that he was the greatest. Ali was a very controversial person in American history, and yet he is a prime example of accepting people no matter their religion or race. Ali won an unprecedented nine titles,  it is an amazing feat for people back then and even today. Ali very much earned the right to dub himself “The Greatest.”

Although Ali is dead, his spirit, impact, and legacy live on.

“Will they ever have another fighter who writes poems, predicts rounds, beats everybody, makes people laugh, makes people cry and is as tall and extra pretty as me?”