It is now February which also means it is Black History month. This a great time to honor the heroes in black history who greatly impacted America’s history. For the next month, readers can find stories about influential blacks and African Americans who make Black History Month essential. Today, Harriet Tubman is the subject.

Araminta Harriet Ross was born in Maryland 1820 as a slave, until the year 1849 when she escaped. 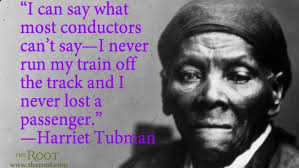 As an adolescent, Tubman was the target of physical violence including a time when her master lashed her five times before breakfast. Harriet would carry the scars of her physical abuse with her all of her life. According to Biography.com “The most severe injury occurred when Tubman was an adolescent. Sent to a dry-goods store for supplies, she encountered a slave who had left the fields without permission. The man’s overseer demanded that Tubman help restrain the runaway. When Harriet refused, the overseer threw a two-pound weight that struck her in the head.” For the rest of Tubman’s life, she endured seizures, severe headaches, and narcoleptic episodes.

After she escaped in 1849, she didn’t hide away for fear of recapture, instead, she chose to help others escape out of slavery. It’s key to note that Harriet did not just release a couple of slaves of their families. In fact, as biography.com states, “Tubman led hundreds to freedom in the North as the most famous “conductor” on the Underground Railroad, an elaborate secret network of safe houses organized for that purpose.”

Looking over young Harriet Tubman’s life, it is straightforward to see why Tubman pledged her life to liberating slaves.

When Harriet was not freeing slaves, she was spying for the Union army. Tubman stopped spying at the end of the war  and devoted her life to helping newly-freed and bankrupt slaves and after that Tubman created her very own “Home for the Aged.”

Harriet Tubman was a pioneer and an inspiration, a constant example of how to serve others. Harriet Tubman will always be an innovation because of how she put others lives in front of her own. Until the day Tubman died she was constantly serving others at risk of her own death.

Tubman’s contribution to African Americans will not be forgotten. Nevertheless, America still has work to do. As a nation, it is time to look out for others, and it is time to see others for more than their race, and the color of their skin. It is way past time to give people equal opportunities they deserve as a human being, no matter what religion they align with. No matter the ethnicity they cherish.

“I freed a thousand slaves I could have freed a thousand more if only they knew they were slave. I had reasoned this out in my mind, there was one of two things I had a right to, liberty or death; if I could not have one, I would have the other…I was free, but there was no one to welcome me to the land of freedom. I was a stranger in a strange land…I would fight for my liberty so long as my strength lasted, and if the time came for me to go, the Lord would let them take me.”