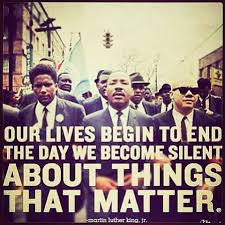 All around the world people are protesting the persecutions of their people. They are outraged by the killings of their people and feel trapped in the stereotypes of their races. They are trying to find a way to make their voices matter. Yet, some believe violence is the best way to have it heard. However, Martin Luther King Jr has something to say against violence. King states during his “I have a Dream” speech, “In the process of gaining our rightful place, we must not be guilty of wrongful deeds. Let us not seek to satisfy our thirst for freedom by drinking from the cup of bitterness and hatred. We must forever conduct our struggle on the high plane of dignity and discipline. We must not allow our creative protest to degenerate into physical violence. Again and again, we must rise to the majestic heights of meeting physical force with soul force.

As a nation, it is vital that Americans remember and learn from the past, and to build upon the multiple examples that have been set decades before; for example, people like Martin Luther King Jr, who foresaw a future for minorities. However, King Jr. knew that as a nation everyone had to maintain dignity and not fall prey to violence.

According to the website Biography states,“Martin Luther King Jr. was born on January 15, 1929, in Atlanta, Georgia. King, a Baptist minister, and civil-rights activist had a seismic impact on race relations in the United States, beginning in the mid-1950s. Among his many efforts, King headed the Southern Christian Leadership Conference.”

King will always be remembered for his famous “I have a Dream” speech, in which he called for the equality of all. King’s idea of freedom was for all to work together, alongside each other with the common goal of justice and equality for all.

“We cannot walk alone. And as we walk, we must make the pledge that we shall always march ahead. We cannot turn back. There are those who are asking the devotees of civil rights, “When will you be satisfied? We can never be satisfied as long as the Negro is the victim of the unspeakable horrors of police brutality.”‘

America has made a lot of progress. However, there is still work to do. As Americans, it is key that all strive to understand each other and look past other’s differences, the color of their skin, and their religion so that all may love each other and work in harmony side by side together. As a nation, it is time to honor the dead that fought hard to ensure freedom and equality for all.

The final words of King Jr’s. “I have a Dream” speech are,“I have a dream that one day this nation will rise up and live out the true meaning of its creed: “We hold these truths to be self-evident, that all men are created equal.”….I have a dream that my four little children will one day live in a nation where they will not be judged by the color of their skin but by the content of their character. I have a dream today! I have a dream that one day, down in Alabama, with its vicious racists, with its governor having his lips dripping with the words of “interposition” and “nullification” — one day right there in Alabama little black boys and black girls will be able to join hands with little white boys and white girls as sisters and brothers.”